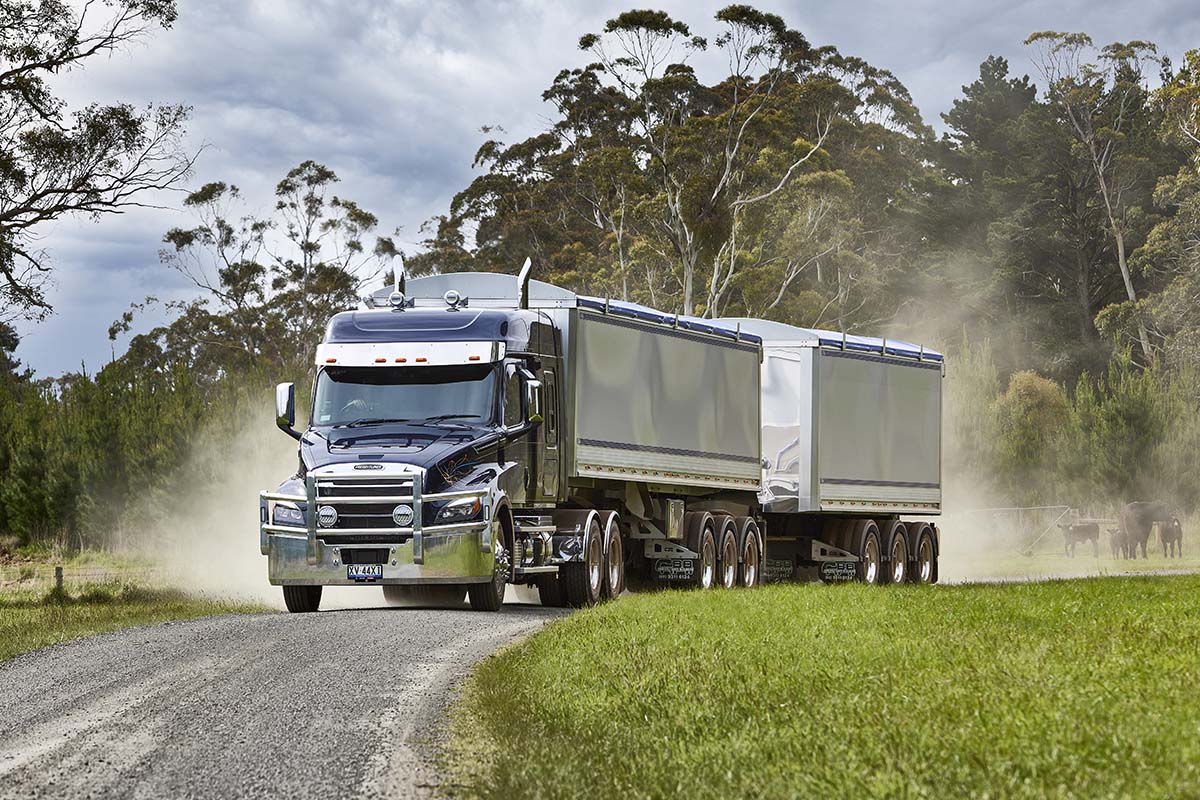 Vehicle reliability and value for money are as important to operators transporting bulk products for the agricultural industry as in any other category.

Based in Bolwarrah near Ballarat in Central Victoria, Mark Rix transports grain and fertilisers primarily throughout Victoria and Southern New South Wales.

Depending upon the season, Mark’s trucks will occasionally travel as far as the NSW New England district. A local for most of his life, Mark was born just five kilometres away in the town of Wallace.

After earning his trade qualifications as a spray painter, Mark transitioned to transport, driving as an employee before establishing his own operation with his wife Kaye, following the familiar path of buying one truck, then two years later buying another, then another.

Mark bought his first Freightliner in 2000 and has stayed with the brand ever since other than adding a Kenworth T610 in 2019.

Mark recently took delivery of his third Freightliner Cascadia which is a 126 model fitted with a 60-inch sleeper cab.

“I’ve bought some Freightliner Coronados over the years and had a good run out of them,” says Mark of his decision to become an early adopter of the latest from Freightliner.

“So I moved on to Cascadia when they came out.” Asked what is important to him in a truck and Mark has a quick and straightforward answer: “Value for money.”

Much of the grain transport is performed on behalf of the giant agribusiness operation Grain Corp.

Fertiliser transport is also seasonal, and only occurs over a few months each year. Much of the fertiliser product is picked up in Geelong and transported direct to farms.

Fertiliser and lime account for frequent loads to the Benalla area on behalf of Benalla Bulk Fertilisers. Mark and his son Ben perform all the maintenance, other than full rebuilds of engines or gearboxes.

Their strict maintenance routines are likely the main factors contributing to the impressive reliability and longevity the Rix family extracts from its vehicles.

“We don’t have a lot of days off,” says Mark. “The trucks are out during the week and we do all our maintenance on the weekend, so they are always on the road.”

Proof that good maintenance pays dividends is embodied by the 2005 Freightliner Columbia, which Mark has only recently sold, although he had some regrets due to an almost emotional attachment to the vehicle.

At the time of its sale the truck had covered more than two million kilometres, the engine being rebuilt twice and the transmission once.

Other components such as the diffs were not touched in all that time. The current boom in the sales of new trucks has also had an effect on the used truck market, with the value for quality second-hand vehicles on the rise.

“I was never going to sell that truck,” says Mark of the C12 Columbia.

“But when I got a good offer on it, I thought if I don’t sell it I would be an absolute fool. I’d rebuilt the motor last year so mechanically it was A1. We put in in for roadworthy inspection and only had to replace the torque rod bushes on the rear and put two windscreens in it. That’s not bad for two million ‘k’s’.”

Having a truck in the fleet which has similar specifications to the Freightliners provides the opportunity for some operational comparisons.

“Fuel wise the Detroit engine is probably a smidgen in front of the Cummins in the T610, but I’m not talking huge amounts,” he says. “It may be 1.85 kilometres per litre compared to about 1.9, but the Detroit does use less AdBlue.”

As the business has expanded Mark doesn’t get to perform as much driving himself as he used to, a situation for which he harbours a little regret.

Travelling to different locations, particularly in the country, results in meeting new people and expanding his network.

The latest Cascadia is connected to a ‘stag’ trailer set from Chris’s Body Builders, the first tri-tri stag combination manufactured by the Melbourne based body and trailer builder.

Mark has specified automated manual transmissions since he bought the Columbia back in 2005.

“I tried running them way back then and I’ve stuck with the auto path ever since,” he says. “Over the years they have got better, but this new 12-speed in the Cascadia’s is second to none and is super smooth. It’s just like going for a drive in my RAM pickup.”

Mark genuinely appreciates the evolution of the Freightliner brand and how it has improved its suitability for his type of operation.

“When I bought the first Coronado I thought it was so much better than the old trucks. I bought three of them in three years and yet the new Cascadia makes the Coronado look almost ancient,” Mark says. “It’s nothing like any Freightliner anyone has ever experienced before. It’s the ultimate.”

Consequently, Mark has acquired three Cascadias during the past 12 months through Brendan Eales who is the Freightliner specialist at the Daimler Trucks dealership located at Somerton in the northern suburbs of Melbourne.

It’s a continual challenge to attract and retain good drivers, no more so than in ‘the bush’, so driver acceptance of certain vehicles is an important issue.

One of the Cascadias has a 34-inch sleeper and performs five trips a fortnight to Adelaide and the regular driver had driven the renowned Mercedes-Benz Actros prime movers in his previous job.

“He can’t find anything wrong with the truck. Towing a single trailer with 600hp it saves half an hour per leg loaded to around 44 tonnes over and back,” he says. “It’s only done 15,000 kilometres but its returning 2.4 kilometres per litre.”

The quietness of the Cascadia cabs and advancement of the hardware and the suite of technologies continue to impress Mark and his drivers.

“There is a lot of value for money in that truck. It’s got everything on it as standard and for the first 500,000 kilometres I don’t have to worry about them which is a bonus,” he says.

“If they can get people to try them they will be quietly surprised at how good they are. If you can get a million ‘k’s’ out of a truck and it hasn’t caused you any grief you haven’t done bad and made a bit of money along the way if you’re doing everything right. But maintenance is the key. That’s the proof with the old 2005 model doing two million ‘k’s’.”