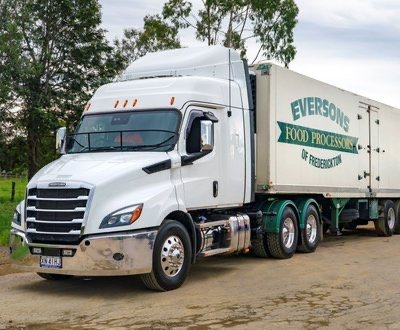 Everson’s Food Processors is a family-owned and managed multi-species abattoir and meat processing facility located in Frederickton, which is just north of Kempsey on the New South Wales mid-north coast.

Everson’s supply meat products direct to Sydney, Newcastle, Gold Coast and Brisbane as well as to local butchers and supermarkets.

Everson’s run a complete in-house operation from buying livestock, then processing and subsequently transporting the meat products to their customers.

Previously the Everson’s operation was what the industry terms ‘service kill’ in that they would process customers’ cattle and lambs and freight the resulting meat back to them. Currently the business model leads more towards supplying wholesalers and butchers with packaged and dressed meats as well as full meat carcasses.

Meat products are sold as far away as Perth and Far North Queensland, as well as into Victoria and South Australia. Everson’s own trucks deliver as far as the Sydney region and western New South Wales as well as to customers located just north of Brisbane.

A growing market segment is the supply of mainly Halal broken lamb and carton meat direct to many Muslim butcher shops located in the Sydney region.

Everson’s doesn’t export any of its meat products but has won an Excellence in Export award at the prestigious NSW Business Chamber State Business Awards.

The award was in recognition of the sale of sheep skins direct to customers in China and Hong Kong which the Everson’s team negotiate themselves.

Cattle hides are transported via an Everson’s tipper truck to Victor Topper at Gunnedah Leather Processors where, after further processing, they can be sold throughout the world.

Jason ‘JA’ McKiernan is the transport manager at Everson’s and oversees a fleet dominated by the Freightliner brand with the Argosy and Columbia models recently being joined by a pair of Cascadia 116 prime movers fitted with 36-inch XT sleeper cabs.

Both Cascadia’s are powered by Detroit DD13 engines with the DT12 automated transmission. The Cascadia’s are the twenty-first and twenty-second trucks that Everson’s have bought from Mavin Truck Centre in Kempsey and the tally includes 17 Freightliners and four Mercedes-Benz.

The Cascadias are equipped with the fully-integrated Detroit Assurance 5.0 system which uses radar and high definition camera technology for Active Emergency Braking and to facilitate the Active Cruise Control.

The system has the capability to detect a slower or stationary vehicle or even pedestrians, and in an emergency the Autonomous Emergency Braking can quickly bring the truck to a complete stop with no input from the driver.

A good relationship with their local truck dealer, recently announced as the Daimler Dealer of the Year, makes good sense to Jason.

“We’ve been dealing with Mavin’s for years and they have been really helpful with everything, and always have been,’ says Jason.

The introduction to the Cascadias happened in a novel way.

“Steve Pinkstone from Mavin’s just turned up in a Cascadia one day and gave me a call and asked me to come out the front and have a look. We went for a spin and by that afternoon we’d ordered two.”

The Cascadias’ safety is further enhanced by the Sideguard Assist system which uses two short-range radars (one aiming forward and one aiming back) on the kerbside to warn the driver if the trailer can collide with objects such as utility poles or street signs when turning left (Trailer Sweep Assist) and also warns the driver if they are about to merge left into a lane already occupied (Turn Assist).

This blind spot safety system uses audio warnings as well as a yellow light on the kerbside A pillar to alert the driver of a potential collision.

The integration of some Japanese cab over rigids into the fleet has not been the success that was initially hoped for so the decision has been made to go back to bonneted Freightliner models for all rigid applications.

The three latest Columbia rigids and both of the new Cascadias are automated manual transmissions.

The autos are used mainly on the coast-based routes and Jason prefers to use experienced drivers in manual transmission trucks on runs up over the steep Walcha Mountain to access the New England area.

FTE is the preferred brand of trailer combined with Thermo King refrigeration units.

“They’re the best and you won’t get better,” says Jason. “We can use a refrigerated pantech on rigids over life of three or four trucks. We recently sold one that was here when I started 25 years ago.”

The onboard truck and Navman telematics provide an insight into the Cascadia’s operational efficiencies and the trucks are usually fuelled out of the onsite bowser without the need to purchase fuel when out on the highway.

“The fuel savings are unreal. Last time I checked we were using 20 per cent less fuel on a trip from here to Sydney than the others,” says Jason. He is also impressed with the reliability and integration of the Detroit engine and gearbox package.

The semis carry full loads of meat every night of the week to Sydney where there are large wholesale meat centres in South Strathfield and Blacktown, as well as to Newcastle where Everson’s has its own depot.

Jason aims to have the Cascadia drivers leave Frederickton by 3.00pm during the week, with their first drop usually at the meat hall at South Strathfield. After unloading they can have their break and head home and generally arrive by 9.00am.

If there is any meat brought back it is unloaded on the dock at the Frederickton facility and the trailers and rigid bodies head to the hot water wash out bay to be thoroughly cleansed. To ensure driver freshness the trucks are usually driven by different drivers on alternate nights of the week.

In recent years the livestock industry has been affected, like most of the agricultural sector, by droughts, fires and the challenges of dealing with COVID.

“The industry is hot and cold at the moment and getting livestock in to process and to sell is a big challenge,” explains Everson’s General Manager Shane Webber who has been with the company for 21 years.

“Fires and floods lead to shortages so the price goes up. We’ve had a hard couple of years, but we haven’t shut for one day. Currently the supply of sheep and lamb is OK but cattle is a nightmare and the prices are the highest I’ve ever seen. Numbers are low and some abattoirs are only working two to three days per week. We’re multi species so we do lamb, beef and goat and can swap and change but beef-only abattoirs are doing it hard.”

In common with many regional industries Everson’s has to deal with a shrinking workforce.

“It’s not too bad for us,” says Shane. “We’ve got two floors going but we just can’t get enough staff so we’ve moved to running one crew on two floors. Upstairs will do the lamb until lunchtime and come down and do cattle until 3.00 or 4.00 in the afternoon. In a perfect world we’d have two crews going at once.”

Despite having around 210 employees across the Everson’s group, Jason is constantly on the lookout for more good drivers.

“I’ve got a good crew around me at the moment and I could do with another couple,” Jason says.

Local drivers, who go in and out of butcher shops, need to be strong to be able to handle the 60-odd kilos of a carcass on their shoulders.

“It doesn’t bother our blokes but for some newcomers it does,” says Jason.

“I’ve been interviewing blokes for 19 years and the tactic now is to walk up to a truck, pull the ramp out sit it on the ground and ask how they’d go running up and down that 200 times a night with 60 kilograms on their shoulder. That’s when you know straight away if you’ve got another driver or not.”