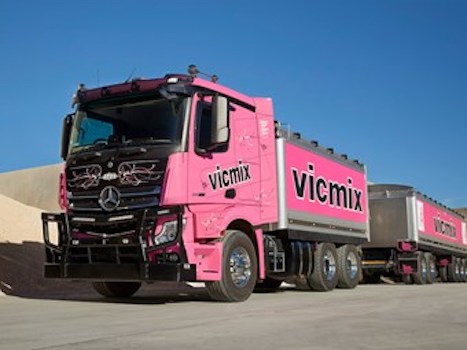 Veteran VicMix contractor Daniel Venditti has upgraded to a new Mercedes-Benz Actros 2663 after his previous run with a 2658 model.

The Victorian owner operator had always driven American-style bonneted trucks before two contacts at Mercedes-Benz Trucks convinced him to give the Actros a go.

It was a decision he did not regret and when it came to replace the first Actros, Venditti picked out the range-topping 2663 model to haul sand and stone.

One of the biggest benefits Venditti says he found from switching from a traditional conventional truck to an Actros was the fuel saving, with driver comfort coming in a close second.

"The fuel numbers came as a real surprise," Venditti says.

"I saved so much money compared to my other trucks and it just kept adding up."

The new Actros, which boasts the more powerful 630hp version of the 16-litre OM473 Euro 6 engine, is also easy on the fuel.

"Running at 63-tonne on a run up to Bairnsdale, it will do 2.4km per litre, which is really great," Venditti says.

"Even around town, it is getting 2.0km per litre which is way better than anything else I’ve driven."

When Venditti first switched to the Actros, he was surprised by how much more comfortable it was than the American-style bonneted truck with a non-synchro manual transmission he had been driving.

"I used to get home after a long day really tired driving the other trucks, but it was so much less tiring in the Actros," Venditti says.

"There was a big difference and I would never go back."

"I was sick of driving a manual, especially when you are doing a lot of stop-start and the AMT is so good that I’m happy to let it do its thing," he says.

Venditti says he is also pleased with the additional performance that came with stepping up to the most powerful engine in the Mercedes-Benz Truck stable, which delivers a hefty 3000Nm of torque.

"You can certainly feel the difference with the 630hp over the 580. It’s noticeable when you are hauling up out of the tunnels in Melbourne and it gets up there really nicely with 630hp," he says.

VicMix, which now sports several Mercedes-Benz Actros trucks in its own fleet, runs a distinctive pink paint scheme that not only stands out but also raises awareness for Breast Cancer Australia, an organisation the company supports.

Venditti, who sourced his Actros through Mitchell Hynd at Whitehorse Truck Centre, made it even more eye-catching with a black bulbar with integrated LEDs, black tanks and polished chrome wheels all around.

To cap it all off, he engaged the services of sign-writer Grant Fowler from Trafalgar to work his magic with some old school scrollwork done with an actual paintbrush instead of cut vinyl.

The 2663’s tipper body and trailer were built by BTE, which has impressed Venditti with its quality and durability in the past.

Like all Actros trucks, the 2663 features two large high-resolution tablet screens that are normally only seen in luxury cars.

"I was surprised to see the screens in a truck. You normally expect to see this kind of thing in luxury cars like Mercedes-Benz AMGs," he says.